Also, Oracle announced in the patch the planned date for parity with the Windows desktop client and its subsequent removal from the suite.


I've been using the web studio for a while now and for the most part it is familiar to those used to the desktop client. The key thing when working with it is to open the report, and then on the left panel click the object (grid, image, text, chart) on which you wish to work. The additions in the 704 PSU address some of the missing items. There are a few more to go.

Posted by ericerikson at 1:31 PM No comments:

In the beginning of HFM, intercompany matching reports were developed in script (using KEdit or Notepad or other text editor), uploaded, and then you ran it to see if it worked, anything need changing, etc. Later on the graphical interface came along and nowadays no one really sees the script anymore.

But, it is still there.

Build one report through the graphical interface like normal and then extract it from the Documents screen. 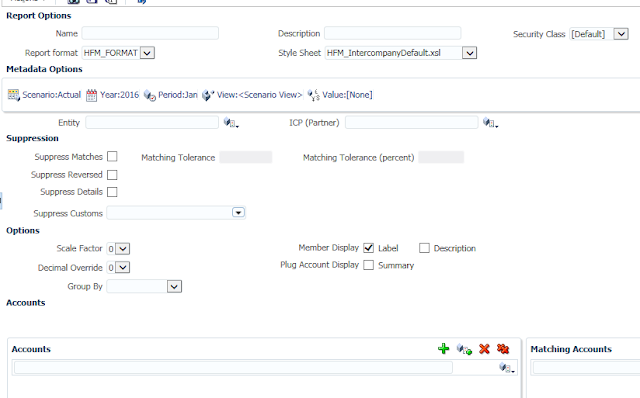 Open the file in Notepad and copy the script into Excel.

In this screenshot, the script is in column L. Cells L2 and L3 and the last cell (AccountPlug) have been edited to use cell level formulas to point to I1 and I2. Column I is fed from a list in column E and F with all of the plug accounts that need a report. 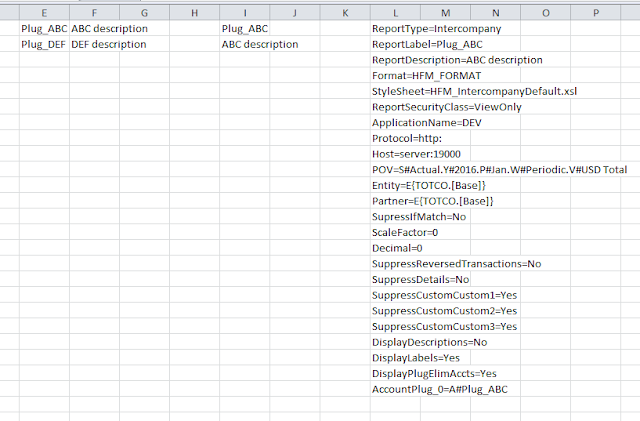 Paste the script into Excel and save the file. Then move on to the next item in columns E and F. If you have a huge amount, you could write a macro that cycles through the list and writes out the text files.

Last, go into HFM to the Documents screen and load in the script files. Make sure to set the options at the top to the desired folder, document type, and security class before selecting the files.

Having to create the reports via script has gone the way of the green home page, but the utility of working with the script is still there.

Posted by ericerikson at 3:20 PM No comments: