Need more than 9 decimal places on a report?


So this comes from the "why bother but hey, why not" file. A financial report listing the currency exchange rates should look like this (actually, this is a screenshot of the final result).

So, what's so hard about this? In this case, the exchange rates come from the GL and have more than 9 decimal places - in this case, up to 12. Fine, HFM works with it. But, in Financial Reporting, you're limited to 9 decimal places. So, how to build a financial report showing the full resolution like above?

Step 1 - build the report as normal, including showing 9 decimal places

Step 2 - Format the data cell(s) for the rates to scale the data by .001 - this will not be on the dropdown so just type it.

Step 3 - Format the data cell(s) for the rates to show numbers with a period for the thousands separator and nothing for the decimal separator. If a period isn't desired, then use whatever character - the idea is we're going to make this look like a decimal even though it's really thousands.

Step 4 - Use a conditional format on the data cell(s)to check the current cell value. If the value is less than 1, format the positive number prefix to be 0. - see screenshot below. Also keep the other formatting options (9 decimal places, scale by .001).

At this point run the report and you should be all set with the result at the top. In this case I was lucky and the exchange rates only went out 12 places. If they went out more, then the fake decimal would not be where the thousands are. I could add more zeroes to the scaling, but then I'd have the fake decimal in the wrong place or worse, two decimals in my amount. At that point you may be better off with a simple data extract.

Necessity is the mother of invention.

Posted by ericerikson at 8:49 AM No comments:

Working today and ran into an issue I haven't had before. It's worked fine for years but now doesn't. Or, at least it doesn't in the specific version I'm using today (FRS 11.1.2.362).

Anyway, using Financial Reporting Studio to write a report with the HFM Value dimension in the columns. Heading display was set to labels. Run the report and - voila! - no column headers. I checked everything I could think of - color, suppression, size, font, etc. and nothing would make them show. I did a custom header with <Entity Currency> and had the same problem.

Next, I did a custom header and left off the < and > and this time it worked. 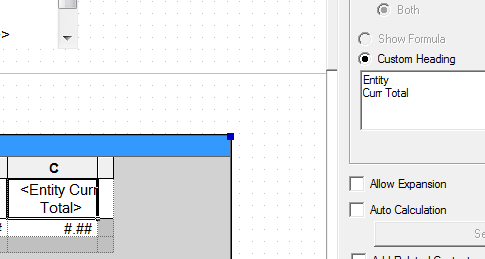 Lesson for today: if something you've done for years stops working, it's probably not you but what you're using.

Posted by ericerikson at 9:00 AM No comments:

One of the more exciting bits of news from KScope14 is the confirmation that HFM 11.1.2.4 - due out "by the end of the year, but subject to change" - will include the ability to run on a Linux server. Most users don't care whether the server is Windows or Linux or whatever, they just want the software to run and run quickly. Oracle said the benchmarking they're doing during development is showing real improvements in speed. Assuming everything works (assets equaling liabilities + equity, etc.) then that will be a definite reason for upgrading. Many customers tend not to upgrade - if it's not broken then don't fix it - but if this upgrade gives everyone more time (think every consolidation, calculation, intercompany matching report, etc. being faster) then an upgrade will definitely be in order. We'll have to see how it looks when it comes out.
Posted by ericerikson at 9:47 AM No comments: